The MS Silja Symphony is a 58,377 GRT cruise ferry operated by Silja Line, a part of the Tallink Group. 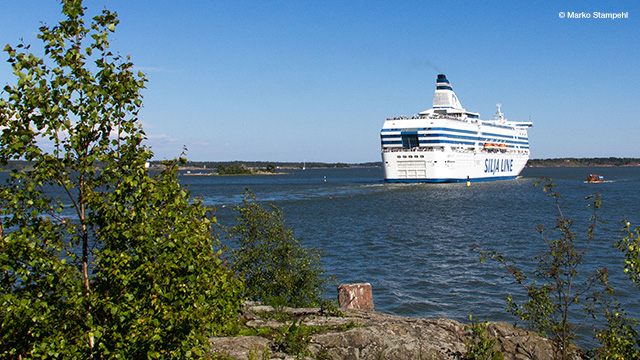 Delivered in 1991, the Silja Symphony has four Wärtsilä-Vasa 9R46 diesel engines for propulsion, rated at 32.5 MW, and auxiliary engines rated at 7.3 MW. In service on the Helsinki-Stockholm route, the ferry consumes some 50 tonnes of fuel oil every 24 hours, sailing approximately 50% of the time. Since PureDry was installed on board, 2% of that fuel is recovered and reused.

The process reduces the waste fuel oil volume by 99%. On the Silja Symphony, just 13-15 kg of “super-dry” solids are produced every 24 hours. These can be landed as dry waste in the same way as oily rags or used filter cartridges.

Not only are there no oil losses, there are no additional wastes generated by PureDry. The separated water, with an oil content of less than 1000 ppm, is easily handled by the bilge water system.

Mats Göras, Chief Engineer of the Silja Symphony, is clearly impressed by PureDry’s performance. “We produce roughly 8 m3 of waste fuel oil every 6 days, and PureDry turns a substantial amount of that waste back into fuel for the engines,” he says. “To be sure that the recovered oil was within bunkering limits, we sent samples to DNVPS for analysis and they confirmed that it was suitable for use.” Not surprisingly, this has had a real financial impact. “With bunker oil at today’s prices, this has meant a significant reduction in fuel costs for us,” says Göras, “and we have also cut our costs for landing waste oil.”

Göras explains that, in addition to cut- ting its fuel bill, the Silja Symphony has achieved major savings on waste oil disposal. “We pay 7.5 EUR/tonne to land waste oil in Helsinki, regardless of the mix of oil and water. By taking reusable fuel oil and a huge amount of water out of the waste volume, we’re left with much less to dispose of.”

This makes PureDry a benefit for Göras’ operating budget, yet the simplicity of the equipment means little work for his crew. “This is the way we would like to see oil separators designed in the future,” he says.

A new kind of separator

The design of PureDry is a paradigm shift, as it is the first high-speed disc-stack separator with both a solid bowl and self- cleaning ability. There is neither a bowl aperture nor a sensitive hydraulic system needed to discharge the solids. Instead, a patented, spiral-shaped device called the XCavator transports the super- dry solids to the base of the machine, where they exit into a container below. There are just two main rotating parts – the outer bowl shell and the separator insert including the XCavator.

Easy to care for

PureDry relies on Maintenance and Service by Exchange, whereby the separator insert and XCavator are simply replaced at fixed intervals. This renewal of the rotating assembly makes maintenance easy, even for inexperienced crew members. For Göras, this creates an excellent balance. “We save money on fuel and on waste oil disposal, and very few man hours are required to keep the unit operating,” he says.