Llandyrnog Creamery processes 1 million litres of milk every day, 365 days a year to maintain its output of hard cheeses such as Cheddar, Double Gloucester and Red Leicester. 20,000 tonnes of cheese leave the site every year for supermarkets and small retailers around the UK. Raw milk is stored in six 160,000 litre capacity silos which are cleaned on a daily basis. The Creamery’s CIP (Cleaning-in-Place) routine involves a pre-rinse using water recovered from the final rinse, a hot wash with a 1% caustic solution, an intermediate rinse with fresh water and a sterilant phase followed by the final rinse using fresh water. This consumes 400,000 litres of water every day drawn from the Creamery’s own bore holes.

The CIP regime was originally devised for fixed spray balls which were installed at the same time as the raw milk silos in 1974. As Brian Emmerson, Llandyrnog’s Chief Engineer puts it: “They were nowhere near as efficient as we wanted and quite wasteful of water and energy.”

The fixed spray balls deluged the interior walls with large volumes of water. As well as being water and energy intensive, shadowing occurred in areas where the water failed to dislodge accumulated product. It also put a strain on the CIP system’s pump, making it necessary to stop and start between cleaning stages to scavenge the tanks.

Investing for the future

Llandyrnog has invested more than £3 million in the creamery since 2004. As part of the improvement programme, they reviewed their total raw milk storage arrangements and decided that the CIP operation needed upgrading. They initially tested one Alfa Laval Toftejorg Sani Mega rotary head and achieved such excellent results that they quickly installed the same equipment in the remaining five silos.

Unlike the flooding action of spray balls, Alfa Laval’s Toftejorg Sani Megas clean through impingement and high levels of turbulence to a predetermined pattern. They scrub the silo’s internal walls with fan shaped jets that produce a vortex action once they reach the bottom outlet. The cleaning medium itself is used to drive an internal turbine and gear system at low speeds (5 rpm) which enables the cleaning process to be controlled with great accuracy.

According to Brian Emmerson, Llandyrnog Creamery was able to reach optimum cleaning efficiency very rapidly once they had the Alfa Laval Sani Megas properly set up. “Once the system was correctly configured we saw a difference. For a start, we noticed that the pre-rinse phase went from opaque to clear running much quicker than before, indicating that we were using much less water. Then, the same happened with the caustic phase and the intermediate rinse and so on. Basically it was a cumulative process with a good reduction in chemicals and water at each phase of the CIP cycle that resulted in less energy and water usage and greater cleaning efficiency.”

Basically it was a cumulative process with a good reduction in chemicals and water."

In fact the Alfa Laval Sani Megas quickly saved sufficient energy, time and water to pay back the original investment. Cleaning times have been slashed from an average of 43 minutes to 28 minutes per silo. As importantly, standards of cleanliness have seen similar improvements.

Total Viable Count (TVC) and other standard test procedures now demonstrate much higher levels of hygiene while shadow areas have been totally eliminated. 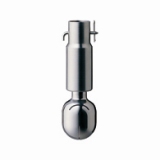