THE SERIOUS FOOD COMPANY, UNITED KINGDOM. This British producer of juice, desserts and smoothies faced the challenge of quickly achieving a stable and homogeneous mixture of high-viscosity fruit purées and fresh-pressed high-fibre juice. By equipping three 15 m3 tanks with two Alfa Laval Rotary Jet mixers each, the dairy quickly achieved stable, homogeneous mixtures. This cost-effective design with low maintenance costs which resulted in a savings of 12,000 EUR per tank.

The challenge when mixing smoothies is to obtain a stable and homogeneous mixture of high-viscosity fruit purées and the fresh-pressed high-fibre juice.

The Serious Food Company wanted a system that, in a just few minutes, could blend smoothies to a homogeneous and stable mixture. They were facing problems with unacceptable mixing times since it took a long time to obtain a homogeneous mix of high-viscosity fruit purées and fresh-pressed high-fibre juice. They also found it difficult to clean the tanks after batch production.

The Alfa Laval Rotary Jet Mixer has either two or four rotating jet nozzles positioned under the liquid surface at the top of the tank. A variable speed pump circulates the liquid to be mixed through the tank in a closed loop system. The resulting flow drives a gearing system in the rotary jet mixer, which causes the nozzles to rotate around both the horizontal and vertical axes.

This double rotation enables the jets to produce mixing action and extend its reach throughout the entire tank volume. This results in fast and efficient mixing of the injected liquid, gas or powder. The Alfa Laval Rotary Jet Mixer may also be used for cleaning the tank; cleaning fluids are then fed through the nozzles of the rotary jet mixer into the tank. 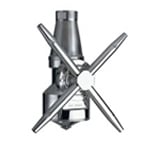