Stefan Slätt owns a craft brewery located on Värmdö island near Stockholm, Sweden. His path into the craft brewing business began when he decided to quit his job as a financial analyst and start a local microbrewery. Stefan reveals in his interview to Alfa Laval what it takes to run a successful brewery and how a beer centrifuge helps him succeed. 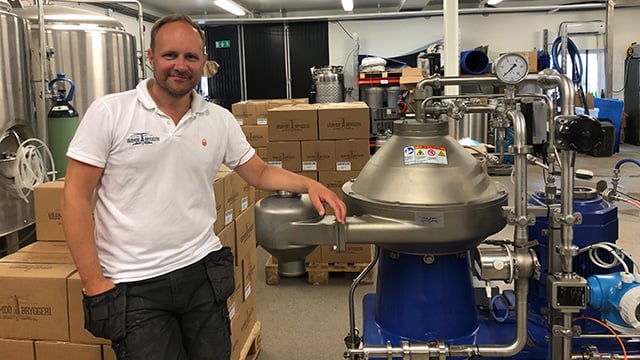 In what ways is Värmdö Bryggeri different from other breweries?

We focus on pale lagers. Other microbrewery owners, many who were homebrewers, are mostly interested in pale ales and more hoppy IPAs. But we wanted to dedicate ourselves to the beer that most consumers drink. We make other types of beer, but our core beer is pale lager. Around 93% of all beer consumed is pale lager. So why should we brew anything else? We organize beer tastings, educate restaurant owners and their staff on how to pair food with beer. We demonstrate how a beer can taste different, depending on what’s on your plate. We know a lot about beer and food, so we’re a fun, knowledgeable partner, not just a local microbrewery. That helps us to stand out on the market.

How did you come up with an idea of starting your brewery?

Before Värmdö Bryggeri, I worked at a bank with investments in Eastern Europe and the Balkans. It was no fun to just sit at a desk and stare at Excel sheets all day. It all started when chatting with a friend I grew up with while we were having a beer in the sauna. We both wanted to do something new. Opening a brewery was one of the options. The idea gelled, and we got so excited and decided: ‘It’s time!’

Around 93% of all beer that is consumed is pale lager. So why should we brew anything else?

We established the brewery in 2012. The space that we rented was much larger than we initially needed, as we thought we’d start small and maybe brew once a week. But we ended up kickstarting the business and launched the brewery much faster. We were lucky to start up before the craft beer market got crowded.

Was it challenging to market yourselves in the beginning?

Once we started brewing beer, we reached out to the consumers who like pale lagers and got positive feedback. Värmdö is spectacular, close to Stockholm, set in the inner archipelago with tiny islands scattered in the sea. The local water is tasty and perfect for pale lager. Every summer, people flock to Värmdö for the holidays. This gave us a big kickstart. All we had to do was visit some local bars, restaurants and stores with our beer bottles and the beer sold itself. Competition is much tougher these days. No venue sells our beer exclusively. Usually there’s a contract with big commercial breweries and venues complement these with our local craft beer brands. Interest in local craft and organic beer emerged years ago and it keeps growing.

When and how did you realize you became successful?

Shortly after we launched our beer, one of the biggest Swedish supermarket chains asked if we could produce a low-alcohol beer for them. That's how we started selling our beer in their supermarkets. After that, another large grocery chain asked us to do the same for them. Our business took off. That was very profitable time for us. Now we put more efforts in promoting ourselves .

Why did you decide to invest in a beer centrifuge?

In order to compete against commercial beer brands our beer had to look and taste as good or even better.  To move forward, we had to make wise investments. First, we wanted to increase capacity and output, and second, to achieve high quality in every batch. Sediment on the bottom of the bottles was an issue then. We started looking into  different filtration solutions but they didn’t impress us. Then we discovered the separator. We visited some breweries using separators and looked at some second-hand options. After looking closely at some machines we chose Alfa Laval Brew 80 because it matched our capacity requirements of up to 50 hectolitres an hour.

We bought our separator in December 2018. Installation only took a day. A week later, we were operating it without any help from Alfa Laval. It’s running well so far. We need to follow our hygienic routines and do a checkup every six months. We run the centrifuge once or twice a week, which is not so often, but we produce beer four to five days a week depending on what we have in our fermentation tanks. If we have something ready to separate, we run the centrifuge. If the fermentation tank is full, then it’s time to brew. Once we have filled two bright beer tanks, we tap.The separator operates quickly and efficiently so we can make two batches a day. 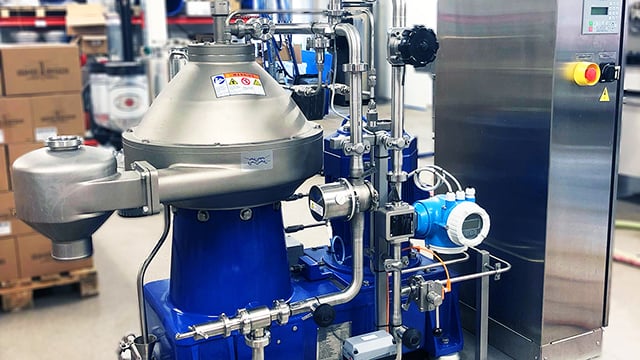 Many brewers think that investing in a separator has to do with the type of beer you want to produce. But that’s not true. You can get a clear pale lager using other methods too. But for us buying a centrifuge was the right decision. We never regretted it. We can still make hazy beer and make beer that’s crystal clear too.

What are the main benefits of using a centrifuge, based on your experience?

The main drawback of the traditional beer-making is product losses. Before investing in a centrifuge, we lost around 250 litres of beer in every batch.  With the centrifuge, we’ve cut these losses to 100 litres, so we get out 1900 litres of beer out of our 2000-litre beer tank. In other words, our yield has increased by 8%. That’s fantastic! And the product that we get out of the fermentation tank has the same quality and consistency. Before we got the separator, we were tapping directly from the fermentation tank, and the beer usually was a bit hazy in the beginning and then clearer and clearer towards the end. The centrifuge ensures that the output is the same throughout the entire process. Since beer is very sensitive to oxygen, we’re happy we don’t need to worry about this anymore. The sustainability of the entire process has improved with this machine too. We’re really happy.

Before investing in a centrifuge, we lost around 250 litres of beer in each batch. Losses decreased  2.5 times with the help of the centrifuge, so out of our 2000-litre tank we get out 1900 litres of beer. Our yield, in other words, increased to 8%. That’s fantastic.

Was it complicated to figure out how to operate the beer centrifuge?

It was quite easy for us to figure out how it works. The only thing I want to mention is that the separator is a bit noisy, so we wear earplugs for protection. In the beginning, we only wanted to use it for our pale lagers. But we quickly noticed that the quality and the appearance of beer is so much better after centrifugation. So now we run all our beer through the separator.

Our capacity was too small for such a machine. But we knew that we want to grow and expand. Buying the Brew 80 was a significant investment for us. Our main goal has always been to offer a high-quality beer. If the quality is high enough, the rest will follow. 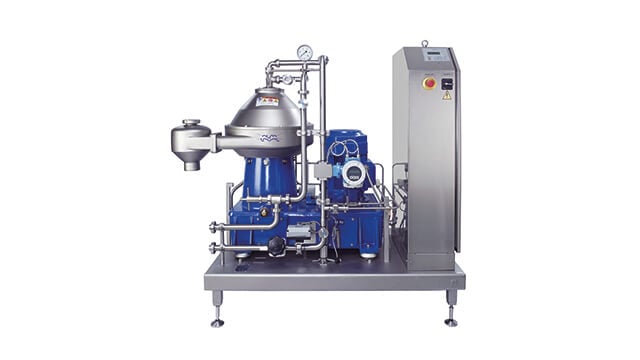 Stefan's advice on how to succeed with your craft brewery:

Like all microbreweries we make mistakes, too. At times, you get beer that is a bit more carbonated than it should be. Sometimes, it’s too hazy or the consistency is not what you expected… What’s most important is to be humble and accept criticism. You should take the product back if a customer is not satisfied or replace it with the product of better quality. We try not to make the same mistake twice.

We’re always happy to hear customers' feedback even if it's a criticism. I see not as offence, but as an incentive to improve. We can brew the best beer in the world. But if the labels aren’t properly affixed to the bottles, customers get a bad impression. These bottles aren’t well placed in stores, so no one will notice them. So make sure your product looks attractive.

Passion means that you are really dedicated to what you do. It shines through when you meet customers and bar, restaurant and store owners. They want to buy a product from someone who really, really believes in what they do.

Quality must be consistent. Beer has to ta­ste the same all the time, every batch, if you want customers to buy your beer again and again. Be sure to take care of your beer before it ends up in the bottle. That’s why a separator is a very useful tool because you know the tank is filled with beer of the same quality and consistency. All you have to do is adjust the carbonation to achieve the right character and taste.

Know your target audience. Is your potential market large enough? Will your business pay off in the long run? What local nuances can you use to your advantage? What’s especially appealing about your beer? Maybe you should connect your beer to a unique atmosphere like eating potatoes and herring in the sun on a pier on a summer evening by the sea. Or when gathered with friends and family around a cozy table, serving grilled meat. It’s not the beer itself that’s the focus, but the feeling you want to convey.

We look for inspiration all the time and recently found it in naturally carbonated cask ale that we came across in British pubs. Last year we were outside of Manchester and brewed cask ale with some local breweries to learn the process. Thanks to our British friends, we now brew and sell cask ale. This is a small but growing trend in Sweden. We plan to travel to England again, or maybe to the Czech Republic or Germany for more inspiration. 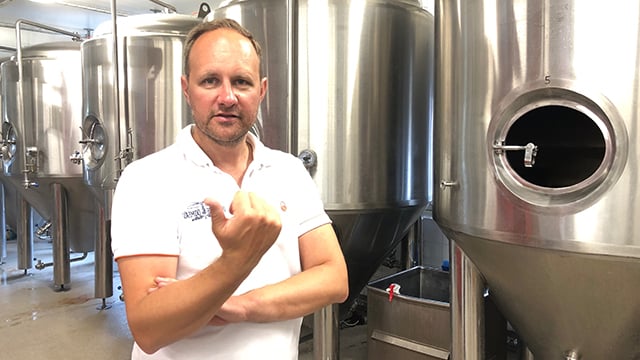 More and more breweries are introducing alcohol-free beer. But they are tricky to produce, because fermenting your beer from 0 % to 0.5% requires a really good yeast due to tight margins. We have received very good feedback on our alcohol-free beer.

A clear trend I see is that craft beer is becoming less hoppy than it used to be. Before, a craft beer could smell like you put your head into a bag with dry hops. The taste of modern beers is more balanced nowadays. You find less of extreme properties, like too much bitterness.

Another trend that is growing is sour beer, which complements food well. Many breweries want to specialize only in sour beer. We brew sour beer, too, but mostly focus on pale lagers.

Many restaurants nowadays have impressive beer lists with recommendations of food. It’s not just wine that attracts attention, beer’s turn has come too. Everyone wants to learn more about beer. Café and restaurant owners also want to understand why guests prefer certain types of beer. People are curious about local beers and want to try them. That’s why craft beer is booming. 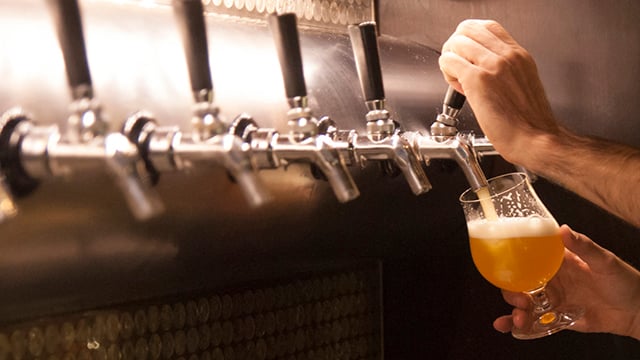 Alfa Laval Brew 80: Get the right fit for your passion

Alfa Laval Brew 80 is a plug-and-play centrifuge module for capacities up to 50 hl/hour. For small breweries, it offers Alfa Laval separation innovations for boosting the yield and quality of your beers – including our unique Axial Hermetic Seal for minimizing oxygen pickup. Brew 80 gives you powerful and efficient performance, with the capacity you need as your brewery grows. 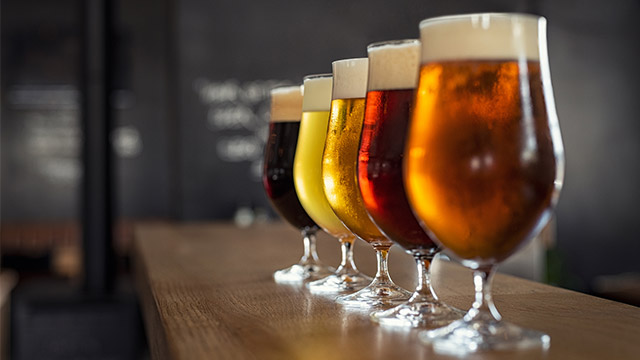